- April 02, 2011
Time to get ready for the 2011 Time Trial season! In a "controversial" new rule, all non-OEM style hardtops have been banned from NASA Time Trials this year. I won't go into any arguments here about the merits of the rule, but either way the result is that I had to ditch my old top in favor of a Honda OEM. This was not a cheap switch, but at least it looks good!

Over the off season (read: one week ago) I moved from St. Louis to take a new job in Sidney, OH. Thanks to Jeff from hardtopguy for making the drive out here to deliver my new top. Just in time for Mid Ohio next weekend! The car is pretty much ready to go. The top is installed and the Hoosiers have been mounted to the RPF-1s. Time to change the oil and get weighed in. 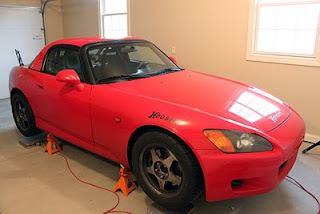 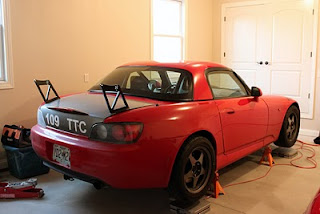 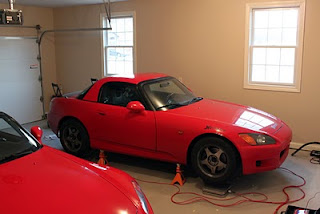 Second At A Crowded Mid Ohio

- July 22, 2011
With two months to go until Nationals at Mid Ohio, the July Great Lakes event was PACKED. We had what must have been a record 57 TT cars putting in times and the traffic on the track reflected it. I came to the track with the same setup and tires as Grattan and was hoping to chase down both the regional TTC record of 1:41.974 and the National record of 1:38.723. However, due to (insert long list of excuses here), I wasn't up to the challenge. Nevertheless, I took home a solid 2nd place finish in a field of 8 TTC cars, behind Aaron Leichty in the #190 S2000 both days. This scored a pair of new tires and extended my lead in the Great Lakes season championship. Though I did break the previous regional TTC record with a best time from the first timed session of the weekend of 1:40.068, Aaron came out of the weekend with the honors of being the fastest TTC car ever on the Pro course with a 1:38.705 on Saturday. He even bested this time in a lap on Sunday, but in an incident eeril
Read more

- September 23, 2014
Since the double win and lap record at Gateway, I've completed four more NASA TT events: Autobahn South in April, Gingerman in June, Blackhawk Farms in July, and Autobahn South again earlier in September. The Autobahn South event in April saw a tough duel at the top of the TTC boards between my AP1 S2000 and local Patrick Reyes' bright orange wrapped AP2 S2000.  On Saturday I managed to edge him out for the third consecutive win of the season with a time of 1:36.476, but on Sunday Pat put down an time I could not reach and had to settle for second. Next, the schedule took us to Gingerman, a track I had never been to before.  Throughout the weekend, as I learned the track on old tires, I was consistently behind both Pat and John Eiler.  John's Lotus Elise, running a lightweight setup on street tires, had taken third both days at the Autobahn event, but never challenged for the lead.  However, I believe John used to work at Gingerman and his track knowledge had him battli
Read more

- November 18, 2010
Unfortunately it looks like my home track, Gateway International, is closing down. Unless something miraculous happens with the finances in the next few years, the 1:09.729 lap in the video below may forever remain the record for TTC (and all S2000s for that matter). Gateway International Raceway Closed by Dover Motorsports
Read more

David Proudfoot
David studied aerospace engineering at MIT before taking a job as an engineer in St. Louis. Naturally a saver, he stated investing early in his career, but without a clear purpose. After receiving an MBA from Washington University, he switched careers to business planning and strategy. Eventually, David applied the lessons he learned crafting multiyear plans for billion-dollar businesses to his personal finances, creating a plan to reach financial independence, and was able to retire at 33.