Next, the schedule took us to Gingerman, a track I had never been to before.  Throughout the weekend, as I learned the track on old tires, I was consistently behind both Pat and John Eiler.  John's Lotus Elise, running a lightweight setup on street tires, had taken third both days at the Autobahn event, but never challenged for the lead.  However, I believe John used to work at Gingerman and his track knowledge had him battling back and forth with Pat all weekend at Gingerman.  Pat barely edged him out both days (about a tenth of a second) to take the wins and set a new track record.  To my credit, despite my struggles back in third place, I did manage to beat the old TTC track record, ending with a best lap time of 1:45.676.

In July, we raced another new track to me, Blackhawk Farms.  This time, things would go much better.  Running a new set of Hoosier R6s, I was able to beat John both days and set a new TTC track record of 1:18.431.  The narrow track through the woods seemed to flow well and suit the S2000.  This weekend also saw my debut of the new AiM SoloDL lap timer, whose continuously calculated predictive lap feature proved useful in judging my line around the new track.

With 8 events in the books, this put me in an advantageous spot in the points standings.  The season consists of 7 weekends for 14 events, with the best 10 events used for scoring.  So far I had accumulated 5 first place finishes, 1 second, and 2 thirds.  I had a decent lead over John in the Lotus and my most difficult competition, Pat, seemed to be falling short of events.  I skipped the next event at Road America, using 2 of my drops, but so did John and Pat.  This effectively knocked Pat out of the Championship, as 6 missed events (4 drops, but 2 events of 0 points) would be too large a hole to dig out of.

This gave me chance to secure the championship at the next event, back once again at Autobahn South.  Pat came back to defend his home track.

Running on a set of used R6s, I couldn't quite catch Pat all weekend and he finished 2 tenths ahead of me on Saturday and 4 tenths on Sunday, my best time for the weekend coming in at 1:35.666 on Saturday (video below).  Sunday morning looked ripe for some fast times, but a busy event meant yellow flags and traffic limited the opportunities.

Critically, however, I kept a consistent gap over John.  Kyle even inserted himself between us, awarding John 3rd and 4th compared to my double 2nd places.  With only one event left on the schedule, this mathematically secured me the championship!  This will be my third season championship in the Midwest region (2008 and 2010) in addition to my 2011 Great Lakes championship. The S2000 returned to the track this weekend in full form, running in the crossover event between the NASA Central and Midwest regions at Gateway International Raceway.  I was able to secure the class win on both days with a 1:10.518 best lap on Saturday and a 1:10.719 on Sunday.  Saturday's time, while short of my personal best and NASA Midwest record of 1:09.729, did take over the top spot in the Central record books for the TTC class. Since the last time it hit the track, the S2000 has had the engine replaced (with another stock unit), the exhaust replaced, the catalytic converted removed, and the splitter added.  As a compromise to the added power and downforce, I was also required to add weight this year, taking the competition weight up from 2815 to 2880 lbs. Given the slower than personal best times, the jury is still out on whether the shift in setup has been an improvement.  I'll have to get back into the swing of things as a driver before I can fully judge the
Read more 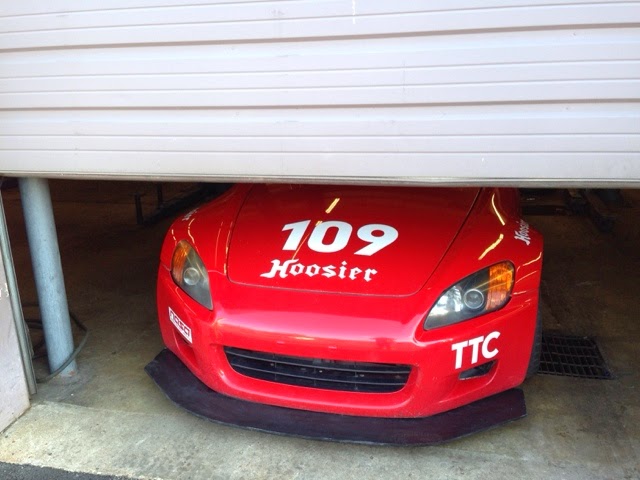 Here is the S2000 at my local Autotire, where I am getting the new Hoosier R6 rubber mounted to the track wheels (which aren't on the car, but will ride home on the Tire Tail). You might notice the giant splitter protruding from the front bumper.  This is a new piece replacing the smaller unit I made and only ran in test sessions.  Gateway this weekend will be my first event using the front aero. The splitter began life as a piece of three quarters plywood.  It is shaped to follow the curvature of the bumper, extending about 6 inches.  The back piece extends the flat bottom to about the centerline of the front axle (as limited by NASA rules). The old splitter, in black above, shows how much larger the new piece is.  Hopefully this addition will allow me to utilize more of my rear aero as well.  The old splitter also provided a quick template for drilling the mounting holes. After a quick test fit, primer and multiple coats of plasti dip were applied, resulting in the look seen in t
Read more

David Proudfoot
David studied aerospace engineering at MIT before taking a job with Boeing in St. Louis. After receiving an MBA from Washington University, he switched careers to business planning and strategy. Eventually, David applied the lessons he learned crafting multiyear business plans to his personal finances and was able to retire at 33.